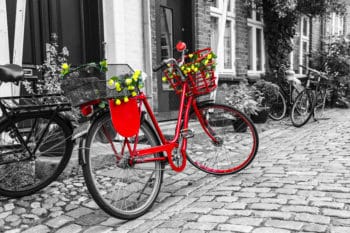 Bicycles have been around for over two centuries, and today, there’s roughly two billion of them being used around the world. They have a rich and surprising history, peppered with interesting facts.

Here are five intriguing bicycle history facts that you might enjoy.

1. The earliest bicycle concept may have been designed by a pupil of Leonardo da Vinci

Leonardo da Vinci, famous for being a prodigious polymath as much as an artist, took a 10-year old boy named Salaì under his wing in order to teach him about art. While Salaì did eventually become an artist, some of Leonardo’s other talents must have rubbed off on him, because in 1500 AD he produced the first known sketch of a bicycle.

While this history is disputed by some, it’s vigorously supported by others.

2. The first electric bicycle was invented in 1897

Electricity had only been around for 18 years before Boston inventor Hosea W. Libbey used it to power the first electric bicycle. He invented what he called a double electric motor to turn the crank axle, but unfortunately, as with many inventions, it wasn’t commercially viable, and electric bikes didn’t become popular until 100 years later.

3. The first practical bicycle – the Laufmaschine – didn’t have pedals

A German civil servant named Karl von Drais lays claim to the first practical bicycle, with a bizarre contraption that he called a Laufmaschine (“running machine” in German). It looked like a bicycle, but instead of being propelled with pedals and chains, the rider used their feet to push the contraption forward. This amusing image from Wikipedia illustrates how it worked: 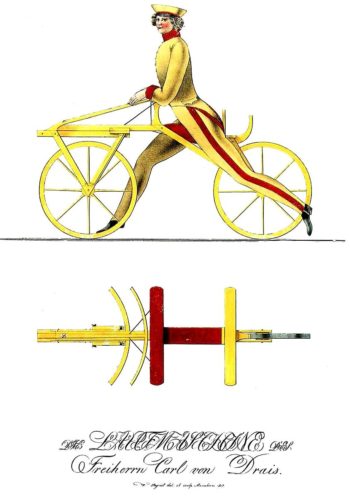 The bicycle ended up being commercially successful, and took on the nicknames “hobby-horse” and “dandy horse,” which is odd because it looks and works nothing like a horse.

4. The Laufmaschine was invented because of a volcanic eruption

Mount Tambora is a volcano on the island of Sumbawa in Indonesia, and in April 10th 1815, it erupted with a ferocious explosion of rock, lava, and ash, ejecting around 10 billion tons of igneous rock. So much ash was released into the atmosphere that it affected temperatures across the world, with the following year becoming known as the “Year Without a Summer.” Crops were affected dramatically, which is believed to have led to the deaths of around 90,000 people, as well as the widespread deaths of horses, which is what spurred Karl von Drais to invent the first practical bicycle—his laufmaschine.

5. Bicycles were used in WW2

When you picture WW2 vehicles, you might think of the mighty German Panzer, boring down on your position as you say your last prayers. Or you might conjure up the dramatic and iconic spitfire and its red-blue circles, cutting through the sky like a dart. But the humble bicycle also played a part in the biggest war of our history, used by both the Germans and the Japanese, as handy modes of transport for paratroopers, scouts, and as a way to transport equipment.

It’s estimated that the Japanese had a total of 50,000 bicycle troops, and while a battalion of 800 soldiers on bicycles might seem amusing, if you saw them cycling towards you, you’d probably still run away.