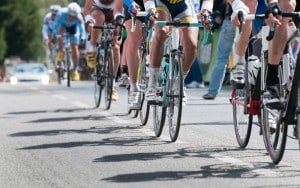 Bike riders use the roads like cars do, so they should also pay rego

It’s a common refrain that’s often barked by those who are pro car and anti-cycling. Those who feel cheated by the fact their cycling counterparts get to use the roads without paying for the upkeep often bring out this argument as an attempt to justify their general dislike for cyclists. At first glance this argument might seem logical enough until you look a bit deeper and realise this argument falls down in so many ways. At Hoffy Cycles we’d like to put this argument to rest once and for all, and also to give some ammunition if someone ever brings out this ‘user should pay’ argument so you can correct them (politely of course.)

Another argument is that cyclists that break road rules should be forced to have registration plates to identify them. Following this logic we would report every motorist who we’ve ever seen texting while driving, perform an illegal manoeuvre or speeding. Chances are that police wouldn’t be able to do anything, and again it’s your word against theirs. Again this is another example of thinly veiled logic from the anti-bike brigade.

Forced registration would also cause those choosing to cycle to drastically plummet. Why penalise and discourage those who choose to do something positive for their health and the environment. Since so many cities, Brisbane included, have been encouraging cycling to take pressure of congested roads and parking, this move would be counterproductive to everything that councils are trying to achieve in regards to infrastructure to encourage cycling.

And finally do we really need more bureaucracy? Think about the massive cost to introduce the scheme not to mention the resources needed to enforce would outweigh any small amount of revenue that could be justified, with little social benefit.

Yes there are benefits to riding a bike, and one of them is that it’s cheaper than driving a car, and good for your health, so why not take advantage of them and come and see us at Hoffy Cycles located at 10 Bowser Parade, Sandgate – (07) 3269 1213.